Harness racing in the Balearic Islands and its origin
7

It was possibly at the end of the 19th century when the first horse races began in the trot mode and with car.toofficial character in Mallorca.
The documents that speak of those years are scarce.
At the beginning of the 19th century there began to be movement with the importation of some stallions and Anglo-Norman mares of the trotting breed.
We could already talk about the first step towards promoting horse breeding but it was not until the twenties that real efforts began to be made to create the foundations of a sport that was beginning to expand.
ORn effort that determined the creation of the Real Sociedad Hípica de Mallorca, the only body at that time dedicated exclusively to trotting, in addition to creating legislation consisting of the Official Bulletin of Trotting Races, to continue importing stallions andxforeigners to promote the indigenous trotting breed in a more serious way.
A few years later the war would cause a setback in the progress of the trot and in the illusion of a project that was beginning to grow. 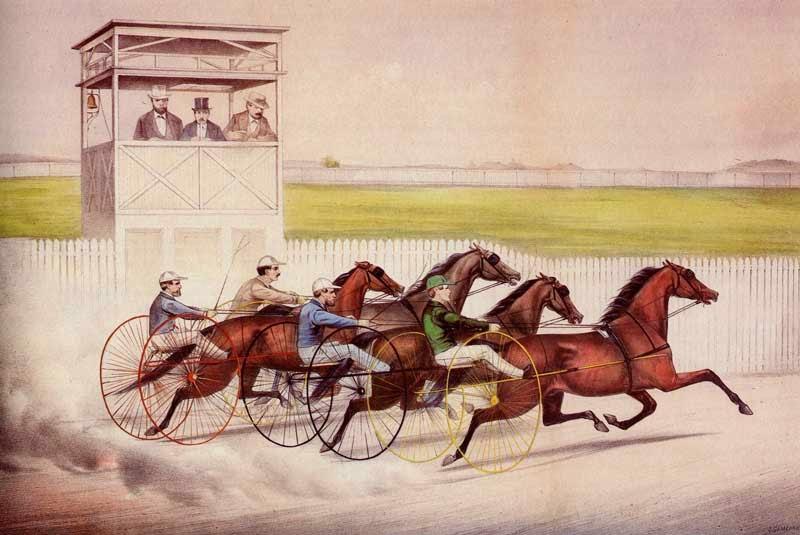 Despite this, the start of a new breed in Spain was already marked.
The 1940signited the rebirth of the trotting world.
Those were a few years in which the first breeders of trotting horses were essential, the mares returned to breed foals and the future was already looking more hopeful.
Fruit of this prosperity was founded the TOassociation from Criators and Powners from Chorses Trotators, of which the statutes were signed on April 13, 1970, Even if it was provincial.
The main objective was to encourage breeding and prtoPractice of the sport of trotting horse racing in all aspects, and participation in official non-profit competitions.
Also, the year 1986 the BALEARIC TROTTING FEDERATION was created, entity that from that date became the regulatory and organizing entity of the trot races that were carried out in the Balearic Islands, a task that to date had been carried out by the Real Sociedad Hípica de Mallorca.
Next, the Federation became part of the highest European body for trotting, the European Trotting Union.
Already in the year 2006, hehe Federation, the Balearic Government and the Higher Sports Council, signed a Framework Agreement in which the Federation was recognized as the only entity in Spain for the organization, government, administration, management, organization and regulation of the trot, thus recognizing the same as Spanish Federation of Trotting Races.

AFTER A LOT OF SEARCHING, WE FOUND THE OLJAS TEAM BLOG, which revealed very interesting information about the world of trotting.
http://oljasteam.blogspot.com/2014/12/historia-del-trote.html
Trotting is an ancient sport that derives from beam racing.
It was already trotted at Olympia in 410 BC. C., although mules were hitched to this light cart.
You have to go back to the Middle Ages to find a breed that is capable of maintaining this gait for a long time: the norfolk, which had its official consecration centuries later, around 1750.
Some years later, regular village competitions began to be held, which were more like challenges or bets between farmers who had indigenous horses, which they used for light dragging in the fields.
In practice, the trot became a popular substitute for the more aristocratic parades and draft car competitions.
At the beginning of XIX century was run informally in the towns of Holland and Belgium, but also in Italy where the first official competitions were held in Prato della Valle in Padua, awarding important prizes for which English specimens or those of the local Piave breed competed, hitched to light vehicles called the paddovanelle .
It was him 1808, and more or less the same thing happened across the ocean, where seventeen years later the first official American track was created on Long Island.

On In 1836, the Cherbourg racecourse was built in France. where Norman specimens competed, which with the Soviet Norfolk and Orlov influenced the formation of the American and French specimens that continue to be in the foreground.
Without a doubt, the modern trot did not have it easy; For a long time it was considered that this specialty was not a natural gait for the horse:
«If the horse trots freely in the meadow -it was said-, it does so for short stretches, not really being able to sustain the march and rhythm during long distances». 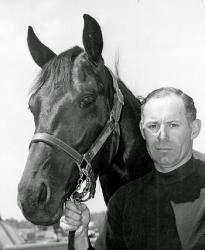 Specific examples on the track have often shown the opposite, although today to obtain an increasingly accelerated speed, without the horse breaking gait (or starting to gallop, which would mean elimination in a competition), many tricks and artifices that have nothing to do with the naturalness of this movement.
Compared with gallop, trot is surely more popular and the number of its races around the world is much higher.
The drivers , who in many cases is also the horse's caretaker, sits on a sulky very light, supporting your feet in special stirrups.
Therefore, the only means available to the charioteer to give the orders to the horse and to control its actions are the long reins, although the use of the whip can also be used, albeit in moderation.
In this case, the importance of having the harness in perfect order and of having made a full-fledged hardware is evident.
Currently, some specimens with special characteristics for trotting are selected and bred in many countries of central and northern Europe and in the USA.
The slopes, with sandy soil, have an average circular development of between 800 and 1,000 m.
However, in France there are longer tracks, with ups and downs that make reaching the finish line more expensive.
More and more frequently it is also raced on snowy tracks, replacing the wheels of the sulky by skates and putting nails in horseshoes.
In general, two laps are given to the track, the fastest ones surpassing the slowest ones a few meters in the same race.
In France, the mounted trot has also spread, while in the United States they have regular races according to the amble gait, in which the foot and the hand on the same side alternate in the movement, instead of the diagonals. 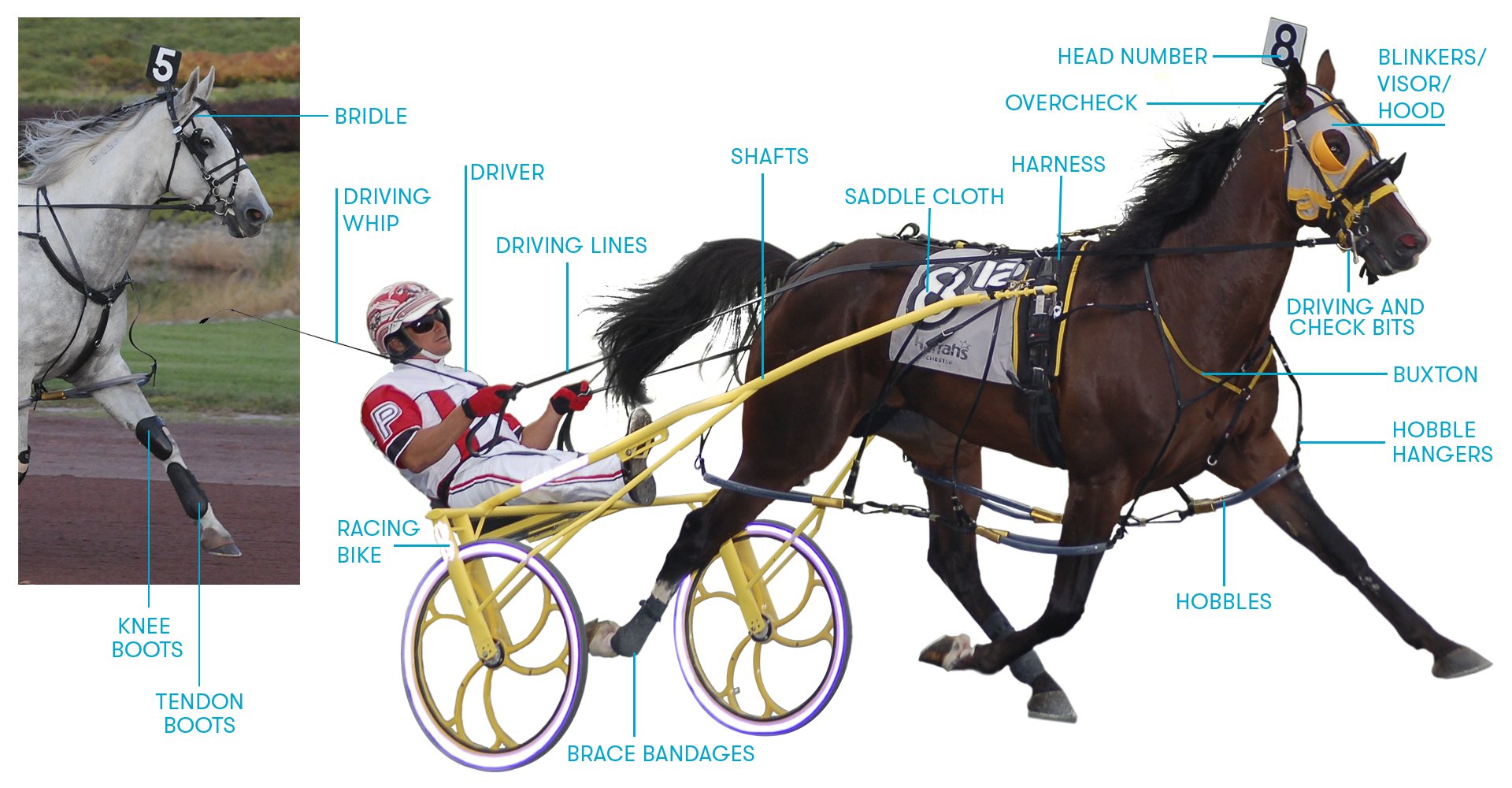